Emil is dynamic and playful. As he enters adolescence, Emil's independence has increased considerably from his juvenile days.

These days, he prefers to explore the forest on his own. Out in the forest Emil spends much time foraging for young leaves. Once he is full, Emil climbs up into a medium-sized tree to build himself a day nest. When he returns to his caregivers and to other orangutans, Emil tends to shy away from one-on-one interactions. However, if a large group of orangutans gets together to play, Emil will always join in. Although he is usually gentle, Emil can be quite boisterous when he is play fighting with his friends. We look forward to the day that Emil can be released to the wild. 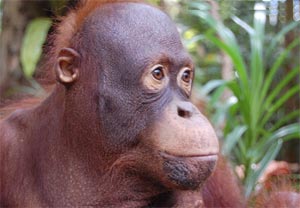