Sam and Cupcake continue to flourish in the Bukit Tigapuluh jungle after being re-released in late 2017. Sam is traveling and foraging for forest food very well. Her wild feeding activity has increased since fruiting season began and she spends over 35% of her time eating which is excellent. Her diet consists of over 50% fruit. Wild orangutans greatly increase their fruit intake during fruiting season to increase energy levels and fat-stores so it is very positive that Sam is adjusting her diet accordingly.

Importantly, Sam also recognises and eats many other forest foods including leaves, cambium and stem. She also loves to find and eat termites which are high in protein. Only a small portion of her diet is supplied by the technicians monitoring her and Cupcake. Cupcake has also started to search for and eat forest foods. He is quite curious and will climb away from Sam to sample different things.

Sam is in excellent physical condition and her stamina is increasing as she builds up her jungle fitness. Sam isn’t very interested in other orangutans and is very protective of little Cupcake. She will generally chase other orangutans away if they came too close to her precious Cupcake. She showed dominant behaviour to juvenile and sub-adult male and female orangutans in the area if they touched Cupcake or tried to take his food. Sam didn’t seem to mind when little Cupcake played with other young orangutans in the area including Chilli, Vanilla and Raja, all wild born babies at BTP. Sam herself is also very playful and affectionate with Cupcake.

Sam has been observed building a new nest for sleeping in every evening high in the canopy. Sometimes she will rebuild an old nest if it is a rainy day. Little Cupcake has even been seen to try his hand at nest-construction however he still uses his mum’s nest to sleep in since it is far more comfortable. Everyone is absolutely thrilled at how well Sam and Cupcake are going after this release and they definitely seem to be settling into jungle life! 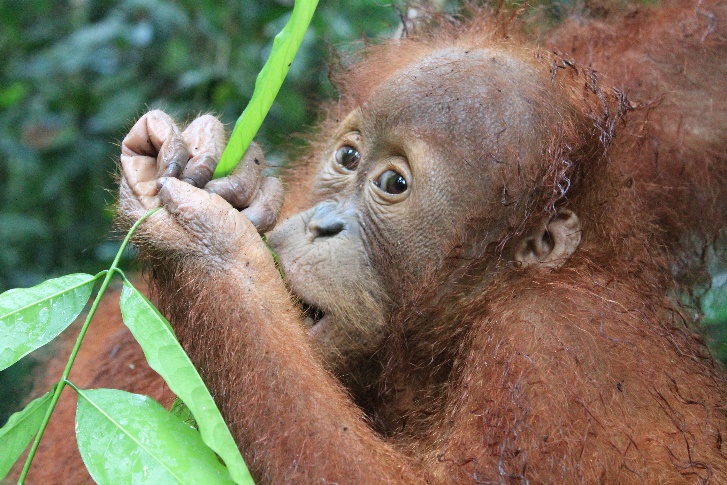